Born and raised just north of Pittsburg, PA... Lauren is a part time bartender and a full time mommy. Lauren grew up on a horse farm as a child, first riding at 6 months old. This was the beginning of her love for animals. Her parents brought her home her first kitty (appropriately named "Mr.Kitty") when she was a year old and he would be the first of dozens of rescues. Lauren currently shares her home with her very patient and understanding husband Jay & her sons Andrew & Jack. Her furry family includes a Lab mix named Maddie and 2 kitties names Moo-Moo & Harvey Dent.

Lauren joined SNARR in June of 2015, first coming on as foster coordinator and at a later time also taking over adoption coordinator. In fall of 2016, she became the president of the organization. Special Needs animals hold a special part in her heart, her first specials needs rescue was when she was in college and rescued a blind and sickly kitten that was in the middle of traffic. Alpha became his name and he grew up to be a great hunter and a best friend.

In her spare time, Lauren enjoys crafting, reading, gardening and cheering her son on at his baseball games.

Lauren came to SNARR because she believed in the mission and felt like it was the perfect rescue path for her.

Amy is an Emergency Services Dispatcher in northwest Kansas & has been teaching 5th & 6th grade science for the last 20+years. As a child, she brought home any injured animal she found: birds, skunks, raccoons, opossums, among others. She grew up in different states but always came back to the farm in Kansas. There, she worked with horses, cattle, sheep and ofcourse, dogs. Dog rescue was not a far reach from there

She stumbled onto SNARR through Facebook back in 2013 and was told by the Foster Coordinator at that time that they were in need of a Transport Coordinator, but that it was 'kinda really hard.' Challenge accepted! Since then, she has coordinated many runs for SNARR and other rescues, driving several legs herself when the runs come through Kansas, as well as driving for other groups when she's available.

Amy then built kennels and runs & started her own local rescue. Her facility is now the impound for her small town. However, working with local law enforcement, she has taken in stray and injured dogs from all around northwest and northcentral Kansas.

"The education of the public is the most important part of dog rescue. If we, as people, DON'T change, we CAN'T change the situation."

Amy has 6 dogs of her own, Scout, Jake, Oakley, Pearl, PD, and Winston and her horse, Jingo. She also works part time as a substitute teacher and at her aunt's convenience store.

As a child Michelle had a variety of pets, always bringing home some strange critter to take care of... from tadpoles to frogs, lizards, turtles, snakes, guinea pigs, parakeets and once a bat that had gotten stuck in the attic. She has always had dog and cat companions since birth.

Michelle is passionate about animal protection and advocacy. All of her personal pets have been rescued from shelters or the streets. She started on her own path toward animal welfare through transporting (logging over 8,700 miles in 2015 alone!) An emergency brought her first foster to her in Spring of 2015... A plea for a medical foster of an injured 3 month old puppy led her to special needs, where she feels she belongs. "It is SO rewarding to see these animals heal and start trusting again. It's such a heartwarming experience."

In her spare time, Michelle enjoys her personal pets Zoey and Nina, numerous craft projects and up cycling antiques.

Mary Lynne started volunteering in the animal rescue community after she medically retired 7yrs ago. She completes regional home visits for both fosters & adopters as well as transports whever (& as far as) possible. Just over a year ago, she joined the board & serves as the social media coordinator, posting on facebook/instagram/twitter.

She & her husband, Wes, have one rescue- a chihuahua named, Charlie. Mary Lynne regrets not entering a prenuptial agreement with her husband negotiating how many dogs they would have in the house at one time. ..or writing in a clause on fostering animals. In case you are wondering, her answer would have been over 1 dogs & all the fosters! Fortunately for him, he has enough redeeming qualities that they have been happily married for over 25yrs.

Born & raised in the Berkshires of Massachusetts, Krystle started with SNARR in 2014 as a foster & transporter for the Northeast region.

While she loves all animals; hospice & special needs are her passion.

Currently, she works at Berkshire Harm Reduction & has 3 dogs/1 cat but her long-term goal is to one day move to Hawaii & start a small rescue. 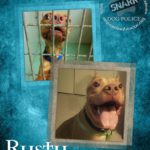